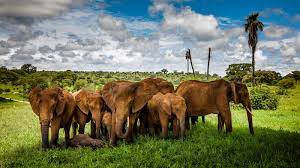 East Africa is endowed with a variety of historical and cultural sites. Each country boasts of a rich history dating back many centuries.

East Africa is endowed with a variety of historical and cultural sites. Each country boasts a rich history dating back many centuries. The sites found in Kenya include Gedi ruins in Malindi, Fort Jesus in Mombasa, and Koobi fora in Turkana all of which have been named world heritage sites.

Here is a report of a few of these sites for those looking for ideas when preparing to go on an African safari. Fort Jesus Fort Jesus was built by the Portuguese in 1593 and was basically a guarding fort.

The fort has now been converted into a monument and it has a history of being conquered several times by the Portuguese, Arabs, and the British empire.

Olduvai Gorge Usually referred to as the cradle of mankind, this steep-sided ravine is located in the Great Rift Valley East of Serengeti plains and measures 30miles in length and 295ft wide. It is one of the most significant prehistoric sites in the world especially due to its aid in furthering the understanding of the theory of human evolution.

The Gorge was found by a German entomologist named (Wilhelm) Kattwinkel who accidentally found it upon the gorge during one of his expeditions. The canyon comprises an erosion-created rift with layer after layer of fossils, bones, and old artifacts.

Louis and Mary Leakey started excavation work at this place and that work continues to this day by anthropologists. Gedi Ruins Once a Swahili town between the 13th and 17th century placed in a village known as Gedi near the coastal town of Malindi, the ruins consist of a palace, mosques, tombstones, and large stone houses.

The area was, however, reoccupied by the nomadic Oromo tribe of Somalia in the late 16th century and later abandoned in the 18th century.

Koobi fora Koobi fora is located near Lake Turkana vicinity and its name comes from the local language meaning the place of Commiphora.

It consists of an outcrop of mainly Pleistocene sediments comprising clay stones, siltstones, and sandstones that preserve numerous fossils of terrestrial mammals

, including early hominid genus and as such has been of great importance in the excavations of fossils important to the human evolution theory.